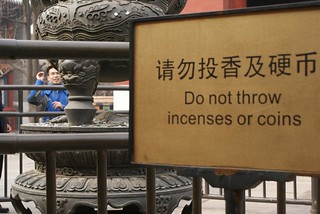 We follow God’s commandments out of our love for Him. When we love someone – a parent, a guardian, a teacher – we do what they ask so that they may be happy. Even when we’re asked to do unpleasant things, we must be patient in our obedience.

O Thou the Compassionate God! Bestow upon me a heart which, like unto glass, may be illumined with the light of Thy love, and confer upon me thoughts which may change this world into a rose garden through the outpourings of heavenly grace. Thou art the Compassionate, the Merciful. Thou art the Great Beneficent God. (‘Abdu’l-Bahá, Baha’i Prayers)

O SON OF MAN! For everything there is a sign. The sign of love is fortitude under My decree and patience under My trials. (Arabic Hidden Words, no.49)

Say: From My laws the sweet-smelling savour of My garment can be smelled, and by their aid the standards of Victory will be planted upon the highest peaks. The Tongue of My power hath, from the heaven of My omnipotent glory, addressed to My creation these words: “Observe My commandments, for the love of My beauty.” Happy is the lover that hath inhaled the divine fragrance of his Best-Beloved from these words, laden with the perfume of a grace which no tongue can describe. By My life! He who hath drunk the choice wine of fairness from the hands of My bountiful favour will circle around My commandments that shine above the Dayspring of My creation. (Kitab-i-Aqdas, para.4, page 20) October 30, 2012: Not bad at all! We held class one day early due to Hallowe’en—we figured there’s no way we could compete with the sheer attractive force of all that candy. All the same, things went really well. We started by gathering the children from outside the apartment as usual; we noticed there was a new girl we hadn’t met before, so we invited her to join us. She’s eleven years old, and fairly articulate. It seems as though she goes to Sunday school, because she easily grasped many of the concepts we shared in class and related them to Christian concepts. After prayers and a short talk about the lesson, we continued with a few games, including the “Freeze & Think” game. When that was done, we embarked upon the painting project we had planned last week: creating a large banner to post up in our host’s home, based on the lesson. It turned out the new girl was very good at drawing, so we asked her to draw a version of the “Fortress of God’s love”, like the one in the colouring page from Ruhi Book 3. Everyone then worked together, paint pots and brushes in hand, to decorate the banner. and then we painted! September 27, 2008: 1.5 hours, 3 children, average age 8-9. we’re back to one teacher again (me). got off to a bit of a rough start (wow, how many times have I written that) and had to go over the rules with the kids. now that I think of it, I totally should have expected to spend this class going over ground rules. one of the children was especially impatient, “we already know the rules!!” (yet was throwing pillows and sitting improperly, etc). so we ended up spending a fair bit of time at the beginning just trying to get ready for prayers, which is never much fun. same child also wanted to read “the longest prayer in the prayer book”; had to reason with him a little on that point (we don’t want to discourage children to say prayers!).  so I asked if the children knew people that they really loved talking to and listening to—conversing with—someone to whom they could feel comfortable telling anything.  then I explained that praying is the same, but conversing with God.  God listens to us, and we are able to tell Him anything that’s on our minds or on our hearts.  if we pick a prayer from the prayer book and recite what it says, and yet our minds are elsewhere being silly and not paying attention to what we’re saying, then God wants to hear us and listen to us, but there’s nothing to listen to.

we’ll have to revisit this concept with the children, but especially with that one child—the concept that prayer is not just parroting the words in a book, but is something you genuinely feel.  perhaps we should devote a part of one class to “how to choose a prayer”; is this an issue that others have had? how did you deal with it? is it something that becomes clearer to the children as they grow older? is it better to deal with it when they become junior youth? dunno, lol.

craft went very well; we made cards for our parents—I did a run to the new art superstore that opened up close to here, and picked up some really nice materials and stamps for the kids to use. it was genuinely fun to do for all of us—we weren’t many, of course, so that probably helped things go smoothly. kids were very excited to hear that there would be more art projects. need to fit in more games, though, especially for the one child who seems to have a lot of trouble learning without them. it almost seems like we should be taking more time for the class, that an hour and a half isn’t enough. now that our kids are older (8-9) they should have the capacity to keep their attention on the lesson as long as it is reasonably varied, and today’s experience seems to have borne that out.