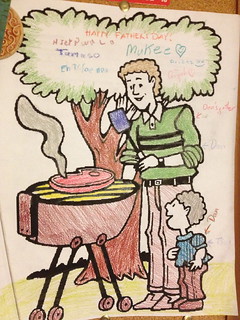 Baha’u’lláh teaches us to honour our parents and show forth kindliness and charity towards them. Families are stronger when they are united, and when each family member supports and looks after the needs of the rest. When we strive to serve our parents and our family every day, it spreads joy and makes our family stronger.

Bahá’u’lláh left his house in Baghdad for the last time on the afternoon of 22 April 1863. He walked through crowds of friends, acquaintances and the merely curious down to the river where he took a small boat across to the garden. He was accompanied by his sons, his secretary Mirza Aqa Jan and perhaps others. He reached the garden just at the time for afternoon prayers. There for the next eleven days he received farewell visits from his friends, including the governor. The river rose soon after his arrival, so it was not until the ninth day, 30 April, that his family was able to join him. (John Walbridge, Ridván)

The fruits that best befit the tree of human life are trustworthiness and godliness, truthfulness and sincerity; but greater than all, after recognition of the unity of God, praised and glorified be He, is regard for the rights that are due to one’s parents. This teaching hath been mentioned in all the Books of God, and reaffirmed by the Most Exalted Pen. Consider that which the Merciful Lord hath revealed in the Qur’án, exalted are His words: “Worship ye God, join with Him no peer or likeness; and show forth kindliness and charity towards your parents…” Observe how loving-kindness to one’s parents hath been linked to recognition of the one true God! (Bahá’u’lláh, Kitab-i-Aqdas, Q.106, p.139)

If love and agreement are manifest in a single family, that family will advance, become illumined and spiritual; but if enmity and hatred exist within it, destruction and dispersion are inevitable. How easily, where unity existeth in a given family, the affairs of that family are conducted; what progress the members of that family make, how they prosper in the world. Their concerns are in order, they enjoy comfort and tranquillity, they are secure, their position is assured, they come to be envied by all. Such a family but addeth to its stature and its lasting honor, as day succeedeth day. It is one of the essential teachings of the [Baha’i] Faith that unity should be maintained in the home. (Quoted in The Family – A Baha’i Perspective, a Statement to The Family As The First Community, a consultation sponsored by the New York NGO Working Group on the Family, p.1)