Paper lanterns are a fun craft to make for various occasions; we’ve made them for the Mid-Autumn Festival (also known as the Moon Festival) in the lunar calendar used in the Chinese and Vietnamese cultures, and there are many similar celebrations in other cultures.

Making a simple lantern is easy! All you need is a sheet of paper, scissors, and some tape or staples. You can follow along with the instructions in the video below to get a good idea of how it’s done: Fold your piece of paper down the middle of the longest side, and once that’s done, cut strips into the folded side. Then, unfold the paper and roll the paper into a cylinder: Presto, you have a lantern. Remember to cut off a strip of paper to make a handle, too!

If you have square milk containers or juice containers on hand, you can also cut holes in those to make your lanterns—you can use a piece of string to make the handle. 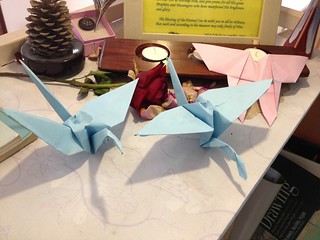 Origami is a simple but enjoyable activity that’s easy to revisit. When planning an activity with origami, make sure to take the children’s capacities into account; simple figures with fewer folds are best for younger children or children with no previous experience, while older or more practiced children will probably enjoy making more complicated figures. Some suggestions for different figures to try with different skill levels can be found below; OrigamiUSA has some useful guidelines for origami difficulty you can refer to.

Once you’ve chosen figures to try in class, the first thing to do is practice making them yourself. This is important, because origami can be tricky, and you’ll need to help lead the children through the process (or risk losing their interest!). As well, once you’ve made your own versions of the figures, you can present them to the class as examples to work towards.

Many origami figures can be made with plain sheets of common printer paper (letter or A4 size). Many figures start from a square base, which is easy to build: simply fold one corner of the paper over diagonally and cut off the rectangular bit that sticks out. If it’s within your budget, you can also invest in a few packages of square origami paper.

Origami can easily be incorporated into lessons about kindness to animals (making origami animals), love (origami hearts), the equality of men and women (paper cranes can be used to illustrate “two wings of a bird”), and many others. 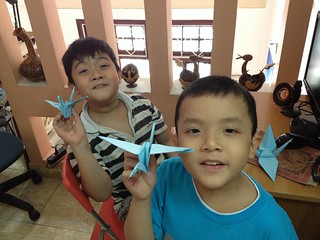 If you’re looking for a nice, creative way to put together stories, drama and crafts in a way that’s fun for everyone, a puppet show is perfect. Children of all ages can participate, even the ones who are normally shy. Any type of puppet can work, but we’ve had a lot of success with plain, simple stick puppets.

The materials needed are simple: bristol board to draw on or as a solid backing to paste colouring sheets on, scissors to cut around the drawings, glue (if you’re using separate colouring sheets), and sticks. Any kind of stick should work, but consider the size of your stage and the desired mobility of your puppets when deciding. Popsicle sticks are convenient and can carry a lot of glue, but they’re very short so you won’t be able to move them around a lot without people’s fingers showing. Wooden barbecue skewers are great, but you’re probably best using tape to secure them to the back of the bristol board.

Have the children colour, draw or paint the characters they want to make into puppets, either directly on the bristol board or on separate sheets; we used separate sheets in case of accidents. Once they’re done, have them cut around their character with scissors, leaving about a centimetre (half an inch) of space on all sides. If you’re using separate sheets, glue them onto the bristol board backing and wait for everything to dry. Then, flip the puppet around and secure the stick (popsicle stick, wooden skewer, or whatever) to the back using glue or tape, whichever works best for you. There you go—you have stick puppets!

For a smaller-scale production, you can also use coloured paper as a backing or for drawing on, but keep in mind that the puppets will be flimsier, since colouring paper is weaker than bristol board. Sockpuppets are relatively easy to make, and they can be a fun way for children to get involved in telling stories, even if they’re usually shy. Not only to they get to create their own characters, but they then get to bring them to life with their own hands as part of a puppet show.

To make a sock puppet, you really just need a sock, and a hand to make it talk! To make it look a little nicer, though, it helps to have the right materials. First off, raid your sock drawer for socks that are mismatched or that have holes. You’ll also need to gather up some basics, including: some bristol board, thin cardboard and/or squares of red or pink felt for the inside of the mouth; some chalk to make washable marks while you make the puppets; scissors, paper and glue (a glue gun works great if you have one); and anything else you’d like to use as a decoration—bits of yarn or string for hair, googly eyes or buttons for eyes, more felt, cotton balls, macaroni, or whatever.

There are a few good, detailed step-by-step guides online to help you make sock puppets; Danielle’s Place has a good one, including a variety of different styles to make.

A number of youth learned how to make sock puppets at a teacher training in Ho Chi Minh City, Vietnam, and they used them to tell the story of The Boy Who Cried Wolf.

A virtue tree is a great addition for a class aimed at younger children, where lessons mainly focus on virtues and spiritual qualities. A bare tree trunk is put together using brown-coloured craft paper or bristol board, and leaves are cut out from green craft paper. During each class when a new virtue is introduced, a new leaf can be added to the tree with the name of that virtue written on it. A relevant quote can also be written on the leaf. The leaf is then attached to the tree, either with tape or velcro fasteners (the latter in case you want to be able to take them down and talk about them later on). Throughout the year, the tree will be filled with beautiful leaves that will help the children remember all the different virtues they’ve studied. There are many possible variations, including making the tree and leaves out of felt, or even drawing the tree and leaves on a tall sheet of paper.