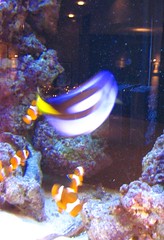 Today’s story was about three little fish who were curious about the wall at the end of their lake. They had asked their grandfather about it and he explained “It is a dam! It keeps us safe. It keeps out the crocodiles, the big hungry fish and the other animals that would eat us. The dam makes the water stay in the lake. It is because of the dam that we do not have to worry about anything. The dam protects us. It is our stronghold.”

“We will never again leave our stronghold!” they cried, and swam towards their mother.