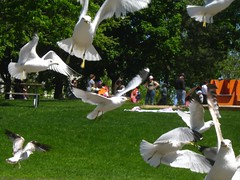 There once was a man named Hájí Muhammad who was a very good hunter. One day with his rifle on his shoulder, he came upon a group of Bahá’ís who were on an outing with Bahá’u’lláh and he decided to join them.

When Bahá’u’lláh saw that Hájí Muhammad was going to use his rifle, He told him not to kill innocent birds. Hájí Muhammad did not pay any attention to what Bahá’u’lláh said because his mind was on hunting, which he loved very much. He continued shooting at every bird he saw, but he was quite surprised to find that none of his bullets were hitting any birds.

The group was returning from the outing when a large, beautiful, white bird caught Hájí Muhammad’s eye. It was so big that Hájí Muhammad thought it would be easy to kill, but again, he missed with every shot he fired and the bird escaped.

Hájí Muhammad was astonished, and he began to think about the whole incident. All of a sudden, he understood something very important. He realized that Bahá’u’lláh had given him a clear command, but in his preoccupation with what he wanted to do, he had ignored Bahá’u’lláh. That day, Hájí Muhammad made a firm decision to obey the commandments of God at all times.