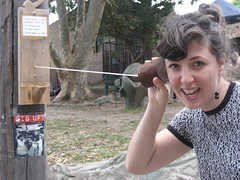 The classic game of “telephone” is a fun addition to any children’s class, and it can be played in many different ways. Gameplay is simple: The entire class should be sitting in a circle. One person is picked to choose a starting message, which he or she then whispers to the next person in the circle; the message is then passed through the entire circle, until the last player announces the message to the entire group. Errors inevitably accumulate with each retelling, so the message usually ends up being quite different than the way it started.

This game is especially useful in lessons on avoiding gossip and backbiting, as it helps demonstrate how gossip tends to alter and pervert the truth of a situation as it spreads, with details of a story changing, becoming exaggerated or even completely untrue. It also helps young children to moderate their voices, by forcing them to whisper instead of speaking loudly.