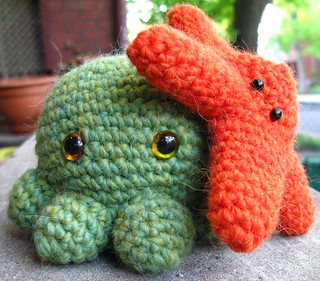 Another popular children’s game, also known as “Octopus tag”. One player, the “octopus”, starts in the middle of the playing field (the “ocean”), and the rest, the “fish”, are lined up against one wall. The fish try to cross the ocean back and forth without getting caught by the octopus. When a fish gets caught, it stops where it was tagged and turns into “seaweed”. Keeping one foot planted in the same spot, the seaweed moves its body around to catch the remaining fish as they cross the ocean.

When all but one player has been caught, the game begins again and the remaining player becomes the next “octopus”.